How do you assess respiration when completing a swallow evaluation?

Do you assess respiration during a swallow evaluation?

What methods can be utilized to assess respiration during swallowing?

There are several really good articles available.  Dr. Bonnie Martin-Harris has been a leader in researching respiration and swallowing.

Below are links to a few abstracts of articles available regarding respiration and swallowing:

Coordination of respiration and swallowing: effect of bolus volume in normal adults.

Effects of posture on the coordination of respiration and swallowing.

An evaluation of respiration and swallowing interaction after orotracheal intubation

Passy-Muir has uploaded a video of normal respiration and swallowing on YouTube.

The lungs are the organs that transfer oxygen from the atmosphere to the bloodstream and carbon dioxide from the bloodstream to the atmosphere.  The lungs are spongy and moist, making them susceptible to bacteria.  The right lung contains 3 lobes while the left lung only has 2 lobes.  Aspiration can occur in either lung, depending on many factors including positioning of the patient.

For more information on the lung, follow this link.  Lung 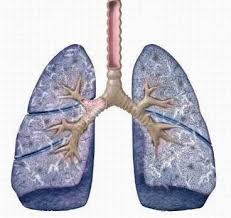 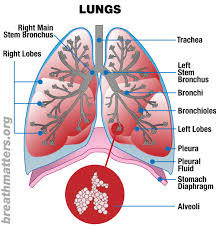 Cervical Auscultation can actually be very useful in determining respiration in conjunction with the swallow.  You can hear that period of apnea when that patient ceases breathing to swallow.  You can also listen to the sounds of expiration and inspiration to determine the patient’s pattern of breathing in regards to swallowing.

Most people tend to use an exhale-inhale-exhale-swallow-exhale pattern of breathing.    The theory is that you exhale partially, swallow then complete the exhale as a defense mechanism to clear the airway of any residue that may remain.

You may want to look at Cervical Auscultation:  A Systematic Review.

It is also important to watch your patient.  If they inhale immediately following a swallow, that may be a large risk factor, particularly if that patient has laryngeal or pharyngeal residue following the swallow.  This may also be observed via MBSS.  There are times you can watch the patient actually INHALE the pharyngeal residue before they can attempt to clear.

What about some of the compensations ortechniques that we ask our patients to use??

Think about those super supraglottic and supraglottic swallows that we ask our patients to use or the breath hold maneuvers.

We typically say to take a deep breath and hold it.  Try to do that.  Then swallow.  Seriously, try it.

When you take a deep breath and hold it, 1.  we are offsetting that exhale-swallow-exhale routine and 2. it’s not easy to swallow when your lungs are full of air.

Another issue may be that the patient becomes confused with the numerous directions they must follow to complete this technique and inhale and/or exhale at the wrong time aspiration.

What can we do to alleviate these issues??

For one thing, we can add visual cues for the completion of the super and supraglottic swallows.  This alleviates the memory issue to some degree.

We can also have the patient inhale, exhale slightly and then hold their breath, swallow and exhale.  This alleviates some of the pressure within the lungs and resets that exhale-swallow-exhale pattern that is more normal.

Coordination of Mastication, Swallowing and Breathing

Given the close relationship of the structures, cortical structures and muscles, to not assess respiration should not happen.  It is vital to understand the respiration/swallowing relationship.
Assessing respiration is another tool in your dysphagia evaluation toolbox.